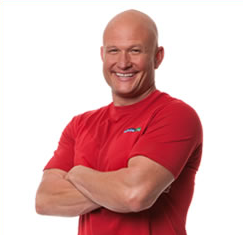 Seventeen years of designing and implementing personal and group training exercise programs makes Steven Maresca an incredible resource and motivator for any one seeking to change their life through fitness. With an intense love for what he does, Steven creates a dynamic, energy-filled experience in every one of his sessions. Combining a wealth of fitness knowledge and sound exercise principles with a keen awareness of current fitness trends makes the cutting edge approach that Steven shares with his clients every day. As founder and owner of Fit Enterprises, LLC, Steven is a fitness trainer for professional athletes, celebrities, weekend warriors and the physically challenged. He meets each client with a customized approach and tailored plan of action to help them meet their health and fitness goals. Also, Steven Maresca is professionally endorsed by Body by Jake, a well known name in the world of fitness programming.

Steven Maresca has had success as a continuing education provider and lecturer for various fitness conferences around the country. He is co-creator of FitCore Fitness programs. Steven also works as a Group Exercise Trainer at Equinox Fitness clubs in Southern California. Known for his high energy approach and positive outlook, he also works as a motivational speaker, pushing and inspiring others to change their lives for the better through fitness and healthy lifestyle.

In collaboration with Body By Jake, Steven developed an entire exercise program and workout regimen for the top-selling Tower 200 home gym. He’s been interviewed and quoted in Shape Magazine, MSNBC as well as Newsweek online. In fact, For the June cover issue of Shape magazine, Steven trained and prepared Danica Patrick, and the workouts created for her were featured in the issue. He also trained her in preparation for the 2009 Sports Illustrated swimsuit edition.

After developing, implementing and appearing in training programs for Exercise TV’s “Make Me Over” program, the video produced shot up to become the second highest downloaded workout video on the Exercise TV site. Of the top 10 downloaded workouts on ExerciseTV for 2009, 3 of them are workouts he created and/or appeared in. Steven has worked with a number of exercise related focus and testimonial groups where he has successfully created, implemented and trained. The first was for the Shadow Boxer, a revolutionary low impact strength and resistance training belt which enables various uses including boxing, martial arts, pilates and strength training without impact. Thirty people were in the sixteen week program including host and TV personality Wanda Colon and Nicole Eggert.

Other successful testimonial groups Steven has completed are the Ab Doer, Total Flex and Nano Gym, each group achieving unprecedented results. Steven continues to work and positively uplift people’s lives by teaching and sharing sound fitness principles and motivating them through cutting edge, highly effective training routines. His future, no doubt, is as bright as his smile!